It's not the usual lap around the block, crossing the Canal adds a bit of nerve.From Calais to Dover is about 15 minutes flying. It should be interesting and educational as we have to cross the Flight Information Service regions of the Netherlands, Belgium, France and the UK. Add a few different habits towards approaching fields in France and the UK, and finding the weather forecast for a much larger area. Also  landing on a controlled airport in the UK would be a first. Well, educational it was!

The french FIS, speaking English, is hard to understand. The airfield of Calais-Duinkerken didn't respond at all to our calls. Yet we landed, since the field was supposed to be open at the time. It turns out this was the case anyway because there were 2 people coming to help us fill up rather quickly. The flight across the Canal was beautiful, we saw the other side from Calais, giving some confidence we could make it. 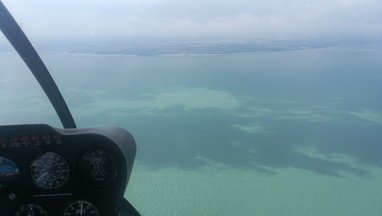 Lille Information turned us over to London Information pretty soon, it was even to soon to be able to contact London. Over England we were transferred to Radar, which one, we had no clue. It made it a bit harder to make the initial call, but we got a respons. Than to Approach of London Biggin Hill. That went well, and we waited to get transferred to Tower. That never happened even tho we had the field clearly in sight. Oops, we are approaching a controlled airport with no contact to Tower!

All of a sudden Approach calls in: "you're number 1, cleared to land". Okay, who need Tower to land anyway. Welcome to the famous field from World War 2 of Biggin Hill. They even still have a base here for 5 flying Spitfires. The next morning during our preflight inspection, one of those takes of. Wat a powerful sound of 12 cilinders with 1750 hp! Full throttle and a low right turn out, wow! A great free additional experience. 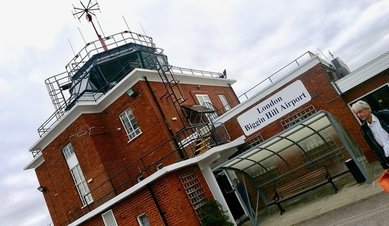 The flight back is even more exciting than the way here. At departure we had broken clouds at about 1500ft , no problem. Cloud base got lower and lower as we approached Dover and visibility decreased along with it. London Information told us another aircraft was heading towards us, coming from the Canal towards Dover. Five times he called us for updates on position, in the end we never saw the other plane. Starting to cross, cloud base kept sinking and so was my comfort level, that water surface seemed to come to close for my liking. Lille Information didn't answer any calls for a while and a light rain didn't make the visibility any better. Not a relaxed way to cross. By the time we came close to the coastline, Lille finally answered. "Stay clear of the nuclear power plant", sure, this we knew already. But there is a convenient gap between the power plant and Calais airport where we could pass. Cloud base wasn't getting any higher and we got a good view of the power plants' high voltage lines. And then, still real sudden, we flew into a thick cloud. Turn around, 30 degree angle of bank turn in blind conditions and divert to Calais. Because of my sudden turn of 30 degrees, with not a lot of vertical margin and high voltage lines in the area, I passed the controls to Rob. For me it felt the margins were gone and it seemed wise to trust his experience. Rob calmly flew us out of the cloud and i could take the controls again to land at Calais.

We changed our plan and instead of landing at Midden Zeeland like we intended, we flew straight back to Lelystad. After about an hour and a half waiting in Calais, we chose a more landward route. Further east the visibility was better and cloud base was higher. On the last leg we noticed Dutch Mill Information had some trouble because of a malfunction at Schiphol but we made it back to Lelystad without any further problems.

A special and very interesting flight to Great Britain, what an awesome learning experience! 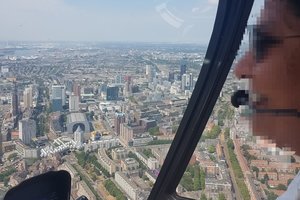 What others say about us: 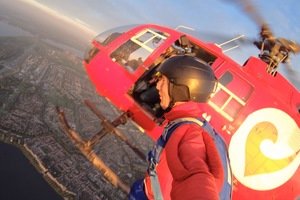 get a taste of the possibilities with these movies